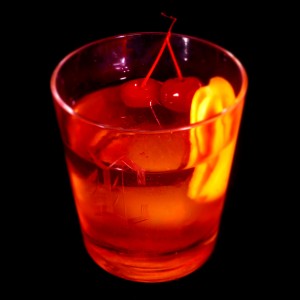 Somewhere in between an Old Fashioned and a Manhattan lies this concoction, which I refer to as She Likes it That Way. While on occasion, you may be able to skip the orange peel & bitters, the two cherries are non-negotiable. Because she likes it that way.

Drop an orange peel skin side down into an old fashioned glass. Sprinkle the raw sugar and bitters and muddle into the peel. In a mixing glass or tin, stir the bourbon, vermouth and Luxardo with ice. Put an oversized ice cube into the serving glass and strain the chilled liquid over the frosty cube. Garnish with an orange peel and two cherries.

I had never been to the Raven’s Club before, despite many years gallivanting down Ann Arbor’s State Street. Primarily known for their cocktails TRC is finding their place in the ever changing restaurant scene in a city mixed with college students, townies and a slew of transient imbibers. My preconceived notions of TRC being strictly a highfalutin speakeasy were quickly extinguished when beverage director Zack proclaimed “to hell with pretentiousness”. He’s been there since the beginning when TRC opened their doors in 2011 with the goal of “creating the bar I wanna hang out in”. After an evening at TRC, I wanna hang out, too!

Zack’s passion for cocktails was energizing- he explained his love of using great American spirits like bourbon and gin. He was most excited about the Vieux Carre, named for the French Quarter in New Orleans, which they blend in five gallon batches of rye, sweet vermouth, cognac, benedictine, aromatic wine and Peychauds bitters. Draught cocktails can be tricky to pull off, but I found the Vieux Carre to be quite balanced. I could tell it was a little strong for the others in the group but as a lover of the brown liquor, I thought it was great.

In addition to perfecting large batches, TRC is also paying attention to the little details that can make or break a cocktail. They make their own bitters, ginger beer and tonic, which Zack insists should be “bitter, bubbly and herbaceous”. I tried the Five Parts with Two James, a grapefruit and gin concoction garnished with a surprisingly aromatic grapefruit peel. It was indeed refreshing and felt like a burst of spring, despite it being a rainy autumn night.

With over a hundred whiskies available, including two dozen bottles of rye, I’m sure I’ll be back to try what else Zack and the gang have in store. Check them out yourself: