Two James Spirits, distillery darlings of Detroit, are celebrating the end of a stellar year while looking ahead to grow their menu as well as their footprint in the national and international cocktail scene.

Since they opened their doors in late 2013, Two James Spirits is now available in four states and two international cities. They hosted their inaugural Ceilidh celebration on St. Patrick’s Day, further cementing their status as a Corktown institution. Their un-aged Rye Dog debuted in early 2014 and took double gold at the San Francisco Spirits Competition. Johnny Smoking Gun debuted in the fall, coinciding with the opening of Johnny Noodle King in Detroit’s West Side Industrial neighborhood. Soon, you’ll be available to find Two James Spirits on shelves in New York and New Jersey and they just added Bloody Mary’s to the tasting room menu (Saturdays & Sundays only).

Here are a few new spirits we’re looking forward to in 2015:

For more info, check out www.twojames.com

Cheers to a new year!

Gold Cash Gold, Detroit’s latest venture into the cocktail/foodie scene, opened to the public last Saturday just in time for Noel Night. Housed in a former pawn shop of the same name, Gold Cash Gold is just a few doors down from established Michigan Avenue favorites such as Slows Bar B Q and The Sugar House. The stained glass panes in the entryway carry throughout the bar and main dining room; just don’t forget to look up as the detailed wood patterns make it one of my new favorite ceilings of Detroit.

The host and hostess greeted us with smiles and were more than happy to direct us to the bar while we waited a few minutes for a table to open up. 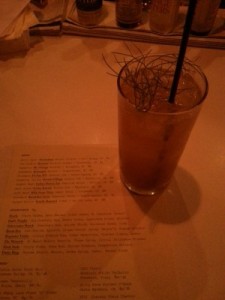 I started with the Boom Box, featuring bourbon, ginger-fennel syrup, orange bitters and Vernors (Detroit’s ginger ale of choice since 1866). Garnished with a fresh sprig of fennel, the Boom Box is a nice take on a bourbon buck. The house-made syrup balanced the sweetness of Vernor’s.

Dad’s Trophy is a reimagined smoky Manhattan, featuring rye and Zucca, an Italian apertif similar to vermouth. The kicker in this drink is the Laphroaig rinse- one of the peatiest islay single malt scotch whiskys. For the non-scotch drinkers, Laphroaig can be described as smelling like a crocodile smoking a cigar, a burning hospital or a band-aid.  NB: Laphroaig’s #opinionswelcome campaign fully embraces that they are an acquired taste. I’m not a scotch person myself, but since the amount is so minimal, it merely provides a scent of smokiness but the flavor of the drink is untouched.

The Sidewinder Watch was beautifully presented in a coupe garnished with a star anise. With black rum, autumn shrub, sourwood honey and lime it felt almost like a rum sour with a spicy finish. It wasn’t too overpowering so even if you’re not a fan of lime, I’d recommend giving this a try since the shrub and honey help sweeten the edges.

After we migrated from the bar to our table, we enjoyed a fabulous dinner. Since this blog focuses on libations, I’ll let the foodies give the low-down on the farmhouse fair; however, I must pass along this pro-tip: Get the farmer’s bread and the fried chicken. Save some marmalade butter for the cornbread- you won’t be sorry!

I had never been to the Raven’s Club before, despite many years gallivanting down Ann Arbor’s State Street. Primarily known for their cocktails TRC is finding their place in the ever changing restaurant scene in a city mixed with college students, townies and a slew of transient imbibers. My preconceived notions of TRC being strictly a highfalutin speakeasy were quickly extinguished when beverage director Zack proclaimed “to hell with pretentiousness”. He’s been there since the beginning when TRC opened their doors in 2011 with the goal of “creating the bar I wanna hang out in”. After an evening at TRC, I wanna hang out, too!

Zack’s passion for cocktails was energizing- he explained his love of using great American spirits like bourbon and gin. He was most excited about the Vieux Carre, named for the French Quarter in New Orleans, which they blend in five gallon batches of rye, sweet vermouth, cognac, benedictine, aromatic wine and Peychauds bitters. Draught cocktails can be tricky to pull off, but I found the Vieux Carre to be quite balanced. I could tell it was a little strong for the others in the group but as a lover of the brown liquor, I thought it was great.

In addition to perfecting large batches, TRC is also paying attention to the little details that can make or break a cocktail. They make their own bitters, ginger beer and tonic, which Zack insists should be “bitter, bubbly and herbaceous”. I tried the Five Parts with Two James, a grapefruit and gin concoction garnished with a surprisingly aromatic grapefruit peel. It was indeed refreshing and felt like a burst of spring, despite it being a rainy autumn night.

With over a hundred whiskies available, including two dozen bottles of rye, I’m sure I’ll be back to try what else Zack and the gang have in store. Check them out yourself:

Congratulations to Ann Arbor’s The Last Word who can now claim the title of The People’s Best New Bar in the Midwest. Avid fans voted early, voted often and helped TLW sail past other strong contenders from Chicago, Milwaukee and Minneapolis. Was it the fresh herbs and house-made syrups? The craftsmanship behind each cocktail? Their own blend of Buffalo Trace bourbon? We think it’s all of the above.

From hosting gourmet pop-up dinners and Green Hour (absinthe, anyone?) we knew it was just a matter of time before Ann Arbor’s best kept secret received national attention. Stop by and see what the buzz is all about.